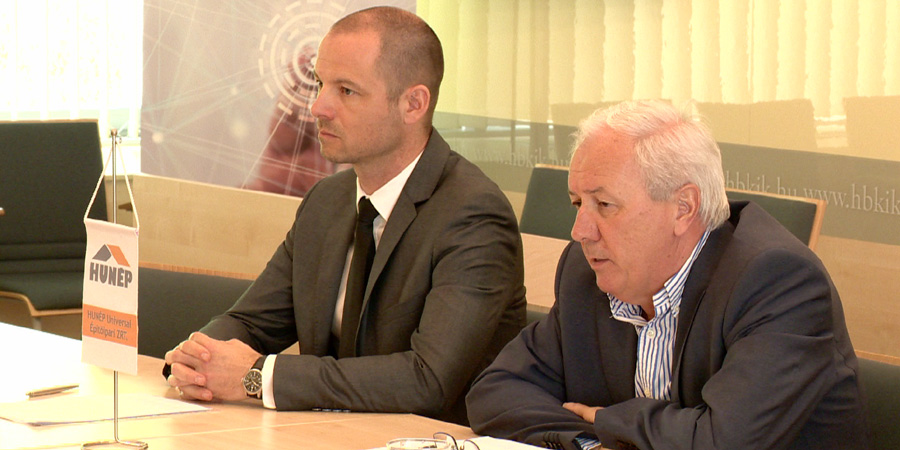 Generational Change at HUNÉP: Gyula Szűcs hands over the leadership of the company

General manager Gyula Szűcs will be followed by Miklós Bakos in the position of CEO of the best-known building construction company in Debrecen. It was highlighted that the generational change does not necessarily mean a conceptual change, and they will also work towards upholding the unbroken trust.

There will be a change in the top executive office of HUNÉP Universal Zrt. from the first of January next year. The present CEO, Gyula Szűcs, and his designated successor, Miklós Bakos, discussed the details of the conscious and years-long process of generational change at a press conference held Tuesday morning, at the Hajdú-Bihar County Chamber of Commerce and Industry.

During the conversation, the question was raised why this change is necessary, and why the time for it came just now, and it was also discussed if the new leadership would also bring a change in the company’s philosophy.

Gyula Szűcs highlighted that the company has come to a point where they feel like it is necessary to hand over the leadership to the younger generation. As he pointed it out, they started getting ready for this change years ago.

Every year they hired new economists and engineers just starting their careers at HUNÉP, and thanks to this, a strong, young generation of colleagues serving as the source of the next leadership was formed. They were in an easy situation, as they could have named three colleagues who were capable of handling the CEO’s position, Gyula Szűcs added.

“We shouldn’t believe that we are irreplaceable, and we should know that the younger generation can know newer, more important things than their predecessors, and with time they will catch up in terms of experience, too,” highlighted the leader of the company.

Why is this change occurring now? There are several reasons for this, both internal and external circumstances, emphasised the CEO, who added that it is worth experimenting with change when the construction industry is not in the downhill. He recalled that between 2008 and 2010, such a change would not have been possible: many companies went out of business back then, but HUNÉP “kept the ship on water”. As he emphasised, this profession is not really characterized by the tendency of being “once on the top, once down”. As Gyula Szűcs said, there were several reasons why the leadership had to be transferred; for example, due to the fact that excellent colleagues could be tempted to and work for other companies, and to prevent that from happening, they have to be shown that they can get further up on the corporate ladder of the company.

The length of the transitional period was set to be one and a half years, during which time the old and the new managements will discuss all important questions, such as the end-of-the-year closing, or the questions of wage development. Gyula Szűcs emphasised that they also consider it important to provide regular feedback for employees on the quality of their work. The CEO underlined that it is essential to maintain trust, as the lack of trust may lead to failure. As an example, he mentioned that it often happens in case of family businesses that the attempt to transfer the leadership from the parents to the children is unsuccessful.

Miklós Bakos said that after graduating from college in 1999 he started his first job at HUNÉP, in the area of production, and he felt that he found his place in this job for the long term. From June 2006, he was heading up the Budapest branch office of HUNÉP, from where works in the capital city are supervised.

He recalled that the question of the generational change first came up three years ago, and it was after a period of continuous thinking together that the actual work with Gyula Szűcs started. He added that there would be new colleagues in three positions, while the chief financial officer would remain the same. They did not think in terms of a conceptual change, and do not announce a concrete programme, only at the time of the inauguration of the new leaders, but he said as much that it is an important goal to serve customers with the same level of reliability as before, as well as to get new partners.

How will the trust with the earlier partners remain, the question was asked, in response to which Gyula Szűcs revealed: after the decision was made, an all-employee meeting was summoned where they announced the facts of the change, so that people would not get their information from hearsay. He added that within a few hours, they also sat down to talk with all four of their financing banks to discuss the next steps, and they ensured that the trust was unbroken. Building this trust takes many years, Gyula Szűcs said, but it can also be destroyed by a single sentence. He is striving to help his successor also in the forging of close relationships.

Mr. Szűcs added that HUNÉP has never been characterized by fluctuation: it happened very rarely that an employee would be solicited from them with the promise of a higher salary, as they make a real effort to pay competitive remunerations. He does know, however, that their colleagues are contacted with job offers by other companies on a daily basis.

Many iconic buildings are linked with the name of the company

The current CEO considers Nagyerdei Stadium and the Regional Court of Law as their most emblematic buildings; however, they also had projects in the value of several tens of billions HUF in cooperation with the University of Debrecen. Both campuses of the University Clinic have undergone significant development, with many buildings renovated, where they also put their expertise to use. Gyula Szűcs underlined that the company has significant references also in Tiszaújváros, Szolnok and Eger, and has received several excellence awards for their projects.

In response to a question by a journalist, he added that the high degree of digitalization also raises important questions at HUNÉP, and that their work has changed significantly over the past ten years. Physical blueprints have disappeared and been replaced by tablets, with various software and other digital devices also helping their work. “Developments in IT make our work easier,” the CEO said, who added that this is also a significant challenge, as his colleagues are attending training courses weekly, and switching to 3D design and implementation based on it is a major change. Digital tools in design have been around for years, but the period of their true integration is only now arriving, Miklós Bakos added. The period of implementation has been shortened as a result, but this may also have a drawback, as there is a bigger time pressure of companies.

The legal predecessor of HUNÉP was founded in 1950, which means that the company is looking back on a history of 68 years, and it generated HUF 13 billion in revenue last year.