Looking back on the 2010s, there were several milestones in the life of HUNÉP Zrt., in terms of the operation, the market activities and the role of the company. We have closed a busy and successful decade, and in the next several years, our aim is to further reinforce the profitability, the sectoral position and the regional market-leading role of the company.

Highlighting the work of the production area, in addition to our architectural top list, the Hungarian news portal Index.hu also compiled a list of the 40 most successful Hungarian architectural projects in the past decade, which also included – much to our delight – two buildings in which HUNÉP Zrt. played a role.

The journalists of Index asked two editors of Építészfórum [Architectural Forum], Krisztina Somogyi and Dániel Kovács, to help them identify the cream of the cream. The end result was a very colourful and interesting cross-section: we were delighted to see that they have found some outstanding projects from different parts of the country, from Hódmezővásárhely to Győr and from Debrecen to Pécs, since good architecture is not limited to Budapest at all.

Despite the many restrictions, eventually, it was decided that the concept of architectural works would also include developments of public places related to buildings, as well as monuments. What is definitely typical of the 2010s was that there were also quite a few reconstruction projects making the final cut, which indicates perhaps that the proper treatment of our existing built environment is becoming increasingly crucial in architecture, and – also related to the ongoing ecological crisis – the proper utilisation of the building stock left by the previous generations is becoming more and more important.

We are proud to present here the two buildings from the top 30 list which were realized by HUNÉP Zrt. 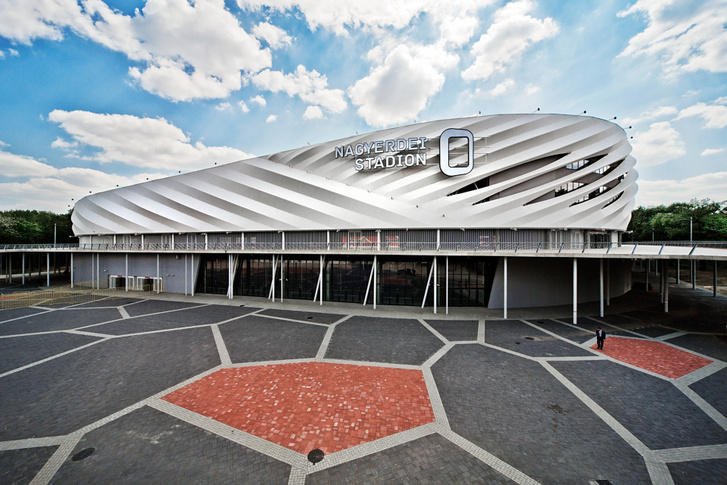 One of the most important building types in the past decade in Hungary was the football stadium, since such facilities were built in a never-before-seen number across the country; however, there were only a few where the architects were able to depart from the well-accustomed patterns. One such project was Nagyerdei Stadium in Debrecen, where the entrances can be approached by ramps and a “floating” pedestrian walkway, which made it possible to better utilise the parts of the building on the lower floor. These include an events hall, fitness room, sports medical offices, etc., which means that the building can operate around the year, and not only on game days. The floating walkway is quite a spectacle in itself, also opening up vistas, not to mention the fact that the running track around the stadium can thus incorporate some inclines, of which otherwise there are very few and far between in Debrecen. The architect wrote about the design here, while the end product was discussed by Építészfórum here.

The “Palace of Sciences” is located in the botanical garden of the University of Debrecen, in a location where an obsolete isotope lab used to stand. The design is the work of two local architects. The almost windowless main facade looks almost like an out-of-this-world apparition floating over the surface of water, with white blocks, with the foliage of nearby trees casting a nice shadow on the plastered walls. The back part of the building is hiding as a hill covered with grass. The entrance via the bridge leads into the colourful world of popular science education. More information on the building is available here on Építészfórum.