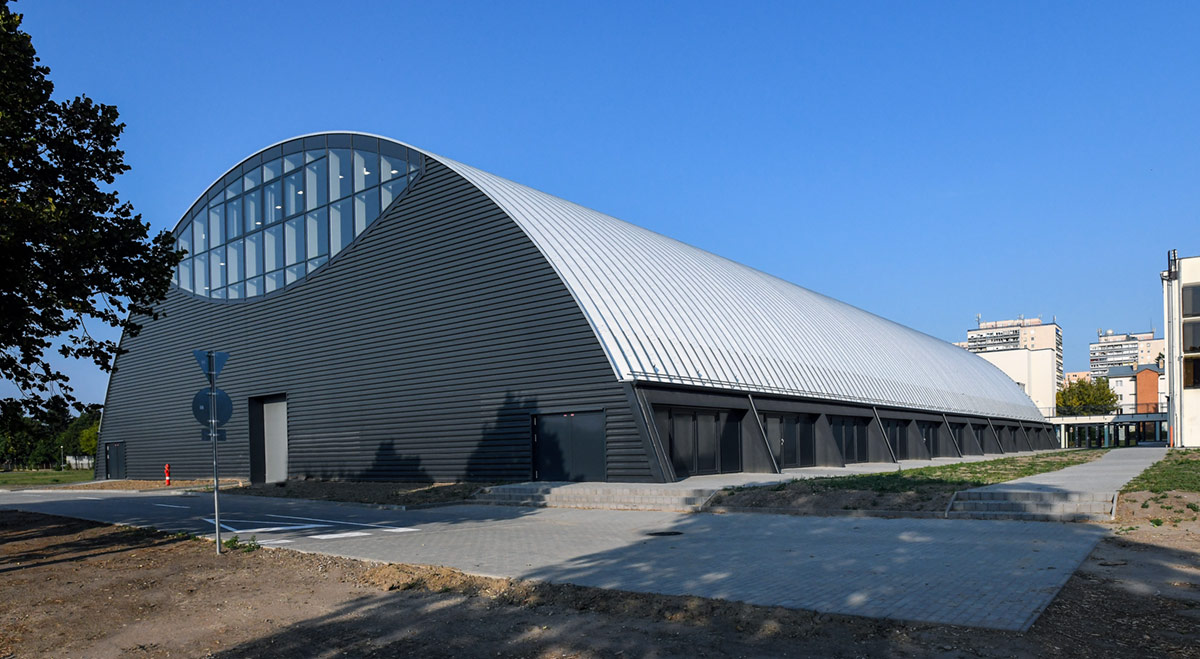 Debrecen – Turtle is the nickname of the recently opened tennis centre of the University of Debrecen.

The building, however, is much more than a tennis centre, as also shown by its full name, Sports Business Management and Tennis Centre. The investment was realized on the Böszörmény Street campus of the university by a consortium of HUNÉP Zrt. and Globál Sport Kft., two companies from Debrecen, which won the contract in a public procurement procedure, from a budget of HUF 860 million (69 percent of which was contributed by the university and 31 percent from state subsidy).

“Since it’s a building of special function, we submitted a joint tender with Globál Sport Kft., a company with a high level of professionalism and numerous references in the construction of sports facilities. We brought to the joint project our extensive construction experience and they contributed their expertise in the field of sports facilities, the implementation of which was supervised by a separate engineering bureau,” Miklós Bakos, CEO of HUNÉP Zrt. said, before inviting participants to a virtual tour of the complex.

The building consists of two main parts: in the head part of the building, there are rooms for education purposes (classrooms, offices) and service facilities (changing rooms, stands, canteen), while in the second section,

in the tennis hall itself, there are four, standard-size, hard surface tennis courts.

“The hall with a barrel vault structure, where the tennis courts are located, is joined with a head building; hence the ‘Turtle’ nickname,” added András Molnár, managing director of Globál Sport Kft.

It posed a challenge

“The barrel vault configuration used in the hall is a special structure, which is not so common these days, but fortunately the designer (KATERV) approached the problem creatively. The basis of the design was developed by a Swiss company, and in recent years, they reached the execution size which is suitable for this type of facility and activity. We are talking about a shell structure in which the cross-section of the entire hall is a semi-circumference, and the structural engineering of the shell results in a self-supporting structure,” the specialists explained.

They also added that this building is more than a tennis hall, since it fits well into the strategic concept of the university whereby sports are elevated into the educational system of the institution. The teaching of sports business management will also take place in the facility, not “only” sporting activity in the classical sense.

András Molnár said that hard court surfaces have been so far missing from the tennis life of Debrecen.

“More than half of the prestigious tennis tournaments of the world are held on courts with hard surfaces these days, which is why the four courts now opened will fill in a gap. This was the first time that we used a new construction materials in the implementation, called glass foam, which is produced here in Debrecen. The courts had to be built with millimetre precision, and in the covering we used a recent innovation (developed in American-Dutch cooperation), which results in a solution that is perfectly suitable for professional-level sports, soft on the muscles and joints, and at the same time a durable solution,” the managing director of Globál Sport Kft. explained, permitting a look behind the scenes.

The consortium is very proud of its new reference, and the management of the companies hope that their joint project will also generate new orders for the implementation of special sports facilities.