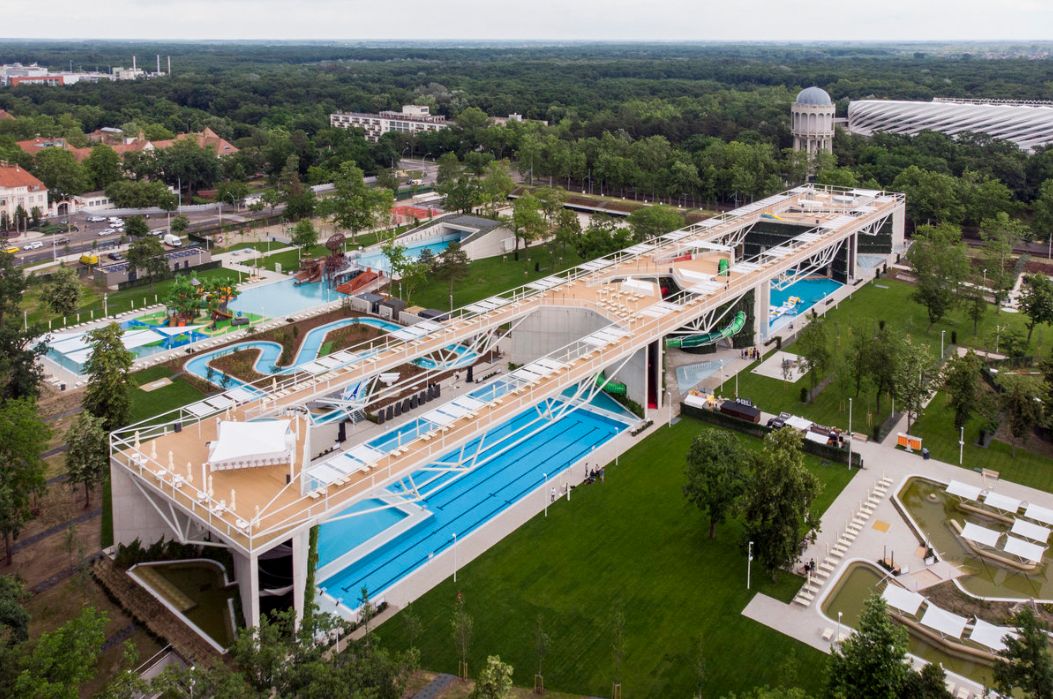 Aquaticum Water Park, constructed by HUNÉP, is part of a large-scale development strategy, constituting a bridge between Nagyerdei Stadium and the beautifully rehabilitated environment of Békás Pond in the park forest.

An important aim of the long-term development programme of Debrecen is to make the park forest a major recreational centre on a national, and even in Central European scale. The spectacularly renewed elements of the development include Nagyerdei Stadium, the environment of Békás Pond, the Open-Air Theatre, the Water Tower, and the Mist Theatre in the Nagyerdő [Great Forest] recreational area. One of the last elements of the development plan was the water park, which was designed not simply to compete with other aquatic facilities, but rather as something unique, offering experiences and spectacles that cannot be found anywhere else.

In the summer of 2015, Debreceni Gyógyfürdő Kft. announced a design competition for the development of the water park located within the area of Aquaticum Spa and Bath Centre. The basic concept on the part of the city was that the new water park, as an iconic element, should clearly link aquatic adventures in the park forest with Debrecen and the Great Forest. The winning design in the competition was submitted by BORD Architectural Studio, while the contract for the construction of the water park was awarded to HUNÉP Zrt. in the public procurement procedure.

The new water park was built linked to the existing facilities of the Spa and Bath Centre, on the site of the earlier water park, as a result of which water park stands on a clearing in the forest. The water park awaits visitors with 15 pools, offering adventures too all age groups from the youngest children to those of the older generations.

The entrances of the facility open from a newly created pedestrian promenade extending on 900 square metres along Pallagi Street. The single-storey, long reception building, following the line of the promenade, includes the main entrance, changing rooms and restrooms, as well as the food court, the units of which serve the water park on one side and the general public on the side of the promenade. From the side of the water park, a slanted green roof runs up to the long and flat mass of the building, the appearance of which resembles a green wave. 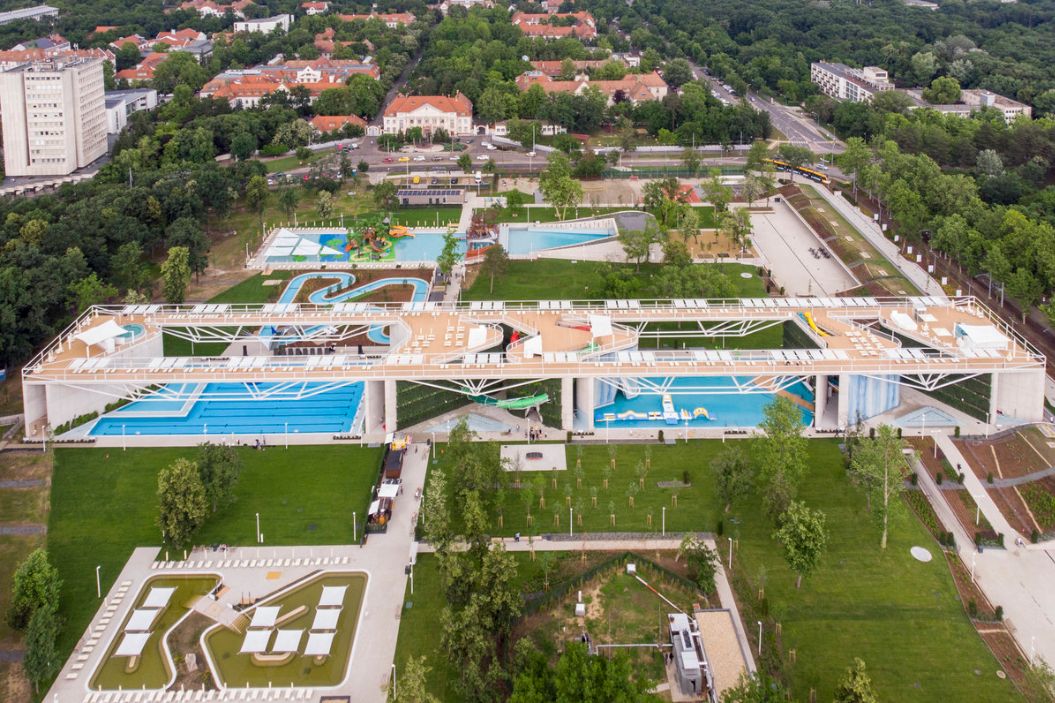 The iconic element in the new water park is the three-storey, 12 metre high central building. The structure, which is open from all sides, houses numerous functions, such as a diving pool, an adventure pool with slides and a cave over the water, a swimming pool, a thermal pool, a relaxation zone, a sundeck and bars. These functions are interspersed by 12 metre tall walls with water features and covered with climbing plants. The sundeck opens up never-before-seen perspectives of the Great Forest to visitors. 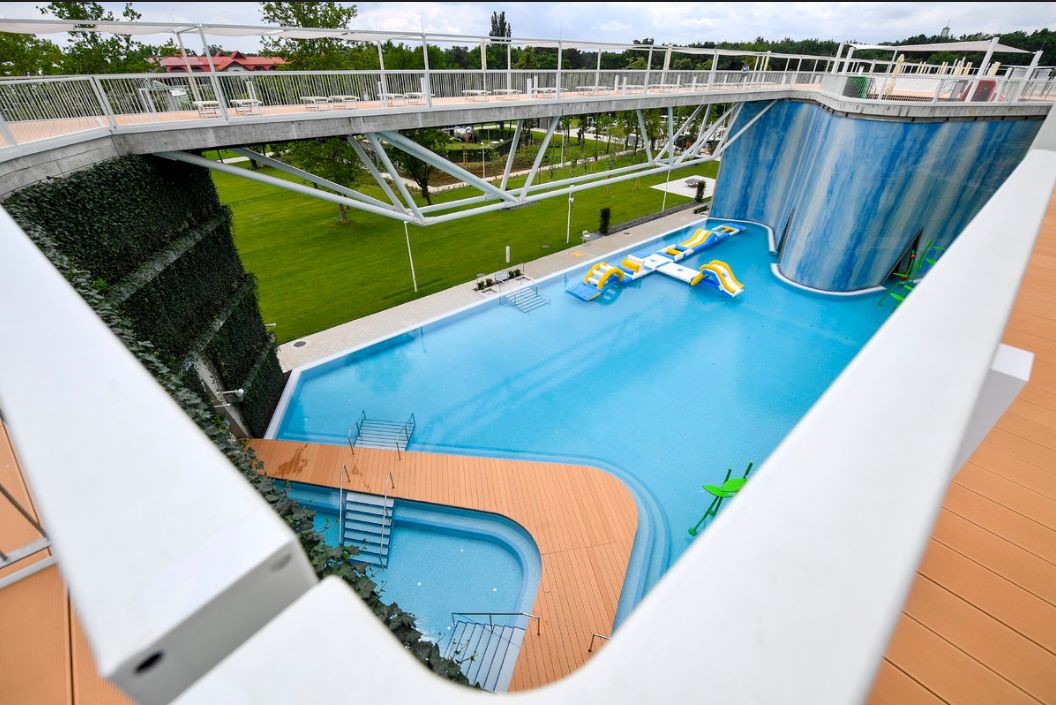 On the pool level, from east to west, there is a medicinal water pool, followed by the “Sports World” section over an area of 1,100 square metres, consisting of a learner’s pool with tepid water, and the sports pool, which has lanes of 50 and 33 metres in length. At the opposite end of the “Sports World” section, in the middle part of the building, there is a relaxation pool. The next larger unit houses the adult adventure pool with four slides: a black hole slide, a sphere slide, the UFO slide, and the “aquatube” slide. Adjacent to the slides, a climbing wall also awaits visitors in the adult adventure pool, which has a total area of 1,150 square metres and a depth of 1.2 metres. 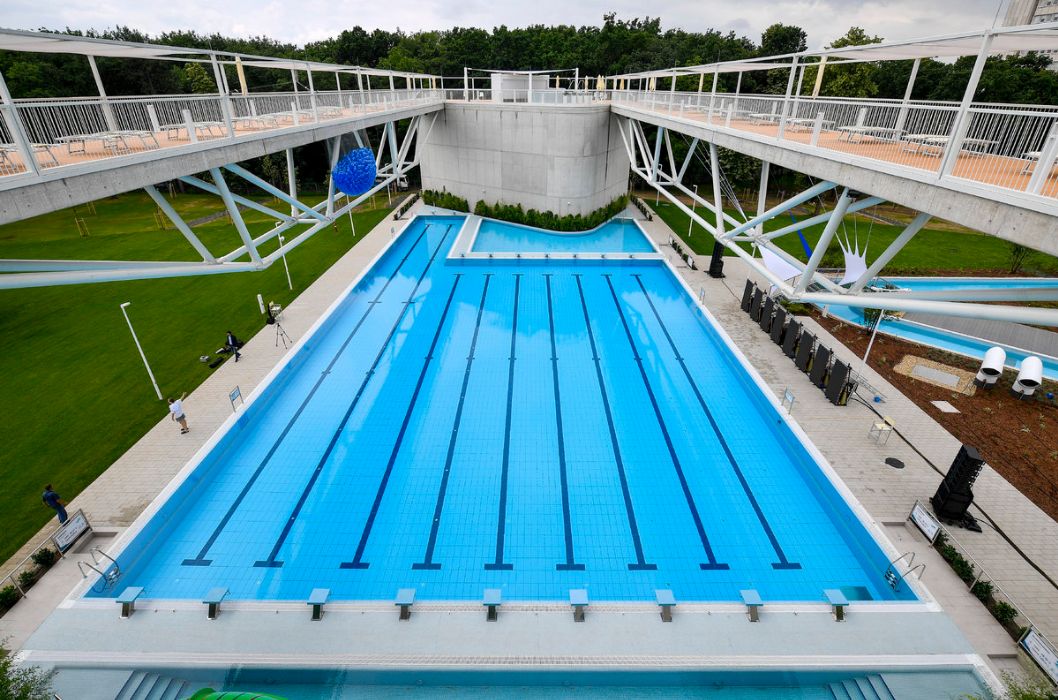 The third larger unit of the pool level is the diving pool of 4 metres depth, which was also a very popular element of the earlier water park. It is possible to dive into this pool from three platforms located at the heights of 1, 3 and 4.7 metres. The diving pool, which has an area of 200 square metres, also features a 4-metre-tall climbing wall and a rope swing.

The sundeck is located on the rooftop terrace of the central building, at a height of 12 metres, accessible by stairs or lift. On this level, in addition to the deck chairs, there are two poolside bars, each adjacent to relaxation pools at the opposite ends of the building. The bottom of one of the relaxation pools is transparent, allowing bathers to see down to the pool level. It is also from this rooftop level that the slides leading to the adventure pool start, the tubes of which are “hidden” in the supporting structure of the building, which makes them invisible from the outside, but offer a real thrill to those riding them. 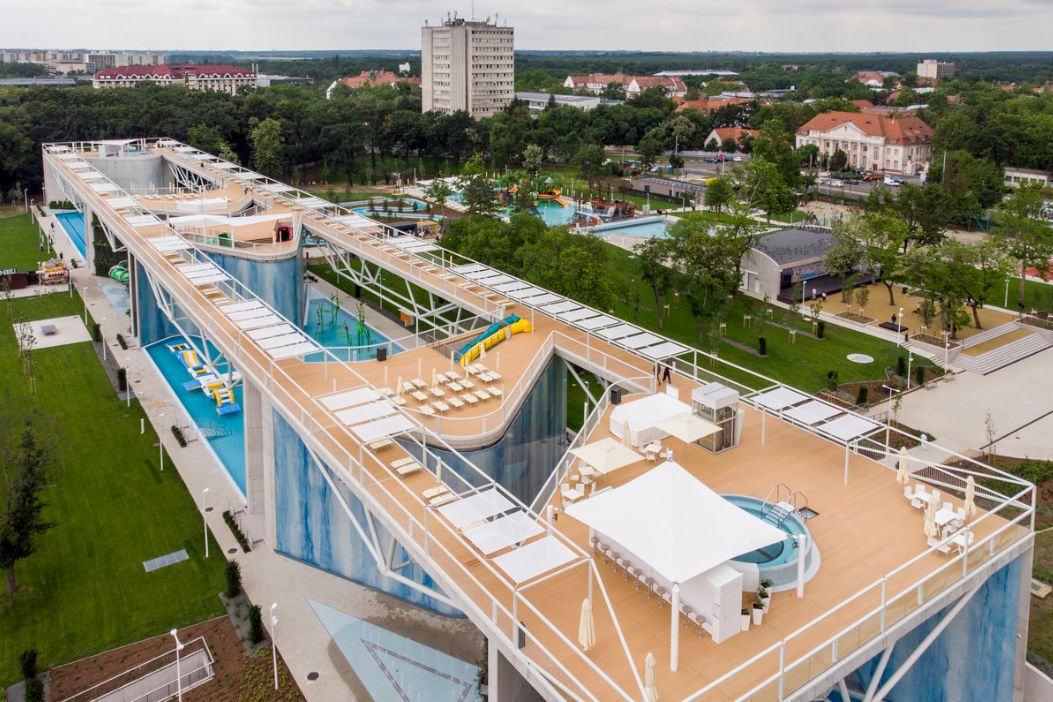 South of the central building, there are also two pools with medicinal water, which were designed primarily with the needs of the older generations in mind. The pools, which have thermal waters of different temperatures, also feature back and neck massaging water jets.

On the other side of the central building, starting from the north, the first large pool area belongs to children. The children’s pool, extending over 1,900 square metres, consists of several parts. There is a paddling pool for the youngest lot (aged 0-4) with a depth of 40 cm, making it safe for even the smallest children. Adjacent to this, there is a children’s adventure pool for those between 4 and 8 years of age, with a spray park and two family slides. Beyond these, we can find the recreation of a favourite feature of the earlier water park, the 2 metres deep wave pool. At the other end of the wave pool, an open-air stage was also built, which serves as an excellent venue for concerts and other performances. 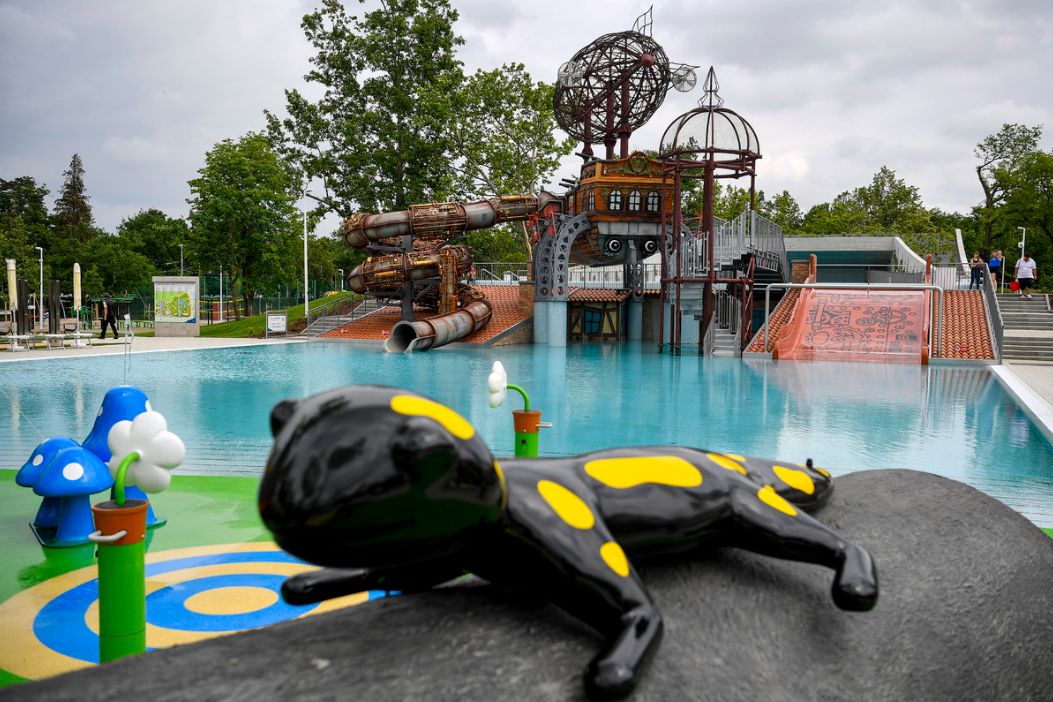 Between the children’s pools and the central building, there is also a so-called “lazy river”: going around along the 1.2 metre deep, slow-moving pool creates the illusion of floating down a real river.

The new Aquaticum Water park opens on 20 June 2020, and will await visitors all summer.

HUNÉP Zrt. is proud to have built, once again, an iconic structure in the city of Debrecen and to have contributed to making the Great Forest one of the most beautiful park forests of Europe.